As a chronicler I must admit with great sorrow, that my records from Corruption did not survive.  They were lost in the burning of the Wintershield library during a Dreadlord raid.  The Shadowbane College of Hearld’s was likewise lost during on the destruction of the fragment, making research into this era very limited.

As the shadows grew long  on Deception and the Void devoured both souls and fragment the remnants of the Great Nations joined forces to unlock the lost secrets of the Runegates and flee the decaying fragment of Deception before all was lost.  One such band of refugees was formed by The Atomic Godz, the Winterblades and elements of Adumbral Empire, who united in purpose under the new nation of the The Chosen for the invasion of  the newly discovered fragment of Corruption.  The guild was lead by Chaka Zulu, with Angelmar, Damebix, Ssly, and Merek as lieutenants.   Unlooked for in those dark days at the end of Deception, emissaries from the seat of the Chruch of the All-Father appeared, with arcane masters of great enough knowledge to open portals between the fragments of Aernyth. 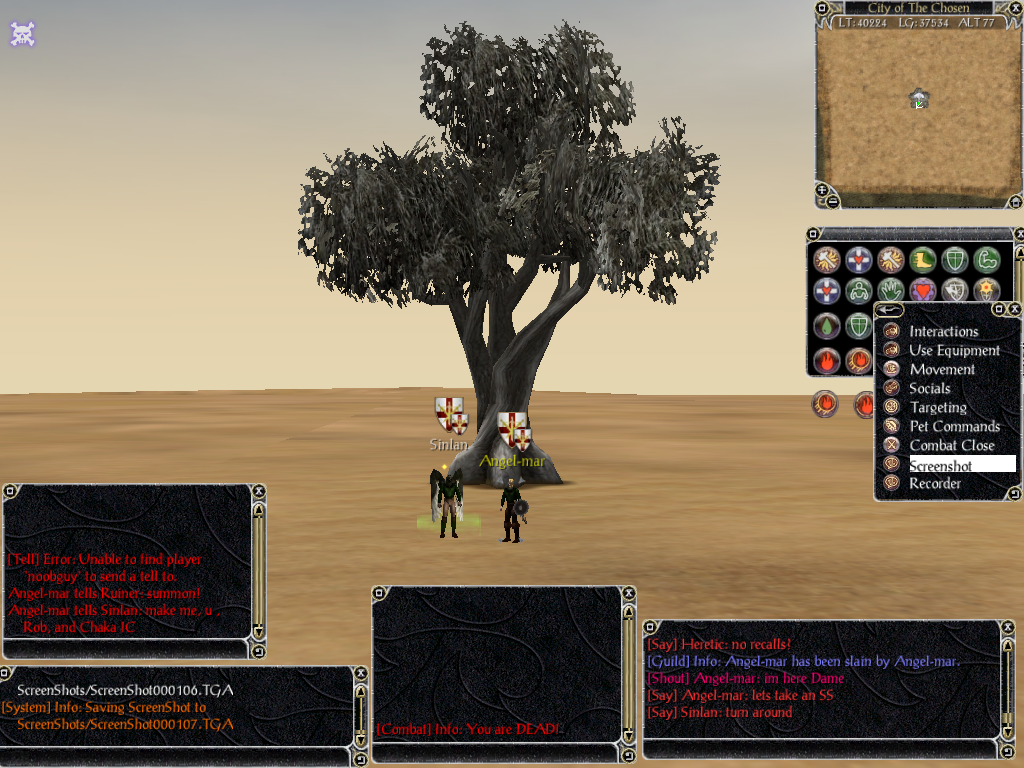 Unlike on Deception, Angelmar was not able to steal enough cash for a tree, and so we massacred orcs in Balegrim Forest until our small core of veterans were collapsing in exhaustion.  The Chosen were rewarded for their efforts, securing one of the first trees of life on Corruption and in a prime location (considered Wintershield IX).  The allies in The Chosen realized the power and security an island home afforded from the Defenders of Order’s long dominance of Deception and thus claimed the smallest of the three desert islands for ourselves.  We gained several sub-guilds and new members including future Winterblade and Sentinel Advocate CoolWaters.

The rediscovery of the Dalgoth Chruch and Corruption were truly halcyon days.  Despite growing pressure from regional enemies an allies alike The Chosen were able to hold their own and chart and independent course of smaller scale siege warfare.  The raids upon island of The Chosen were many and welcomed.  Including many fights with our neighbors The Ship Wrecked Pirates and the first scourge of Corruption, the Dreadlords. 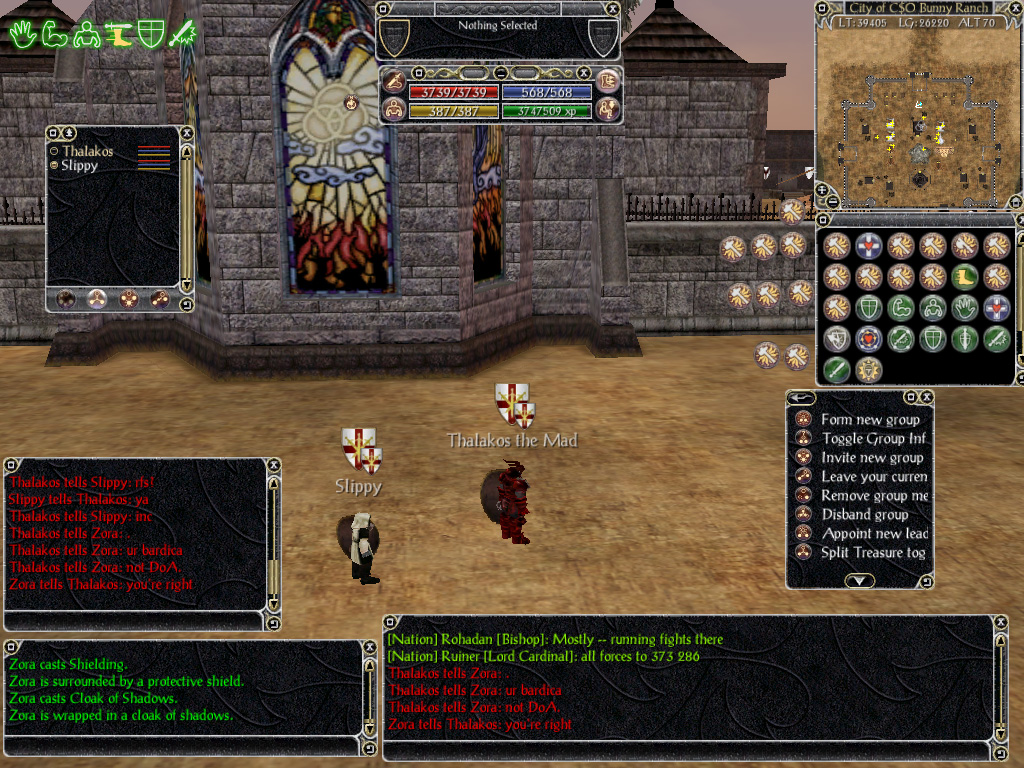 If Deception was the story of the rise and fall of the Defenders of Order,  the great wars of Corruption were the tale the horselords known as the Dreadlords. Although a true hegemon never emerged to dominate the fragment of Corruption, a few great powers ruled in a near endless series of server wars.  The dominant regional factions formed coalitions that contested for a final victory that never came. 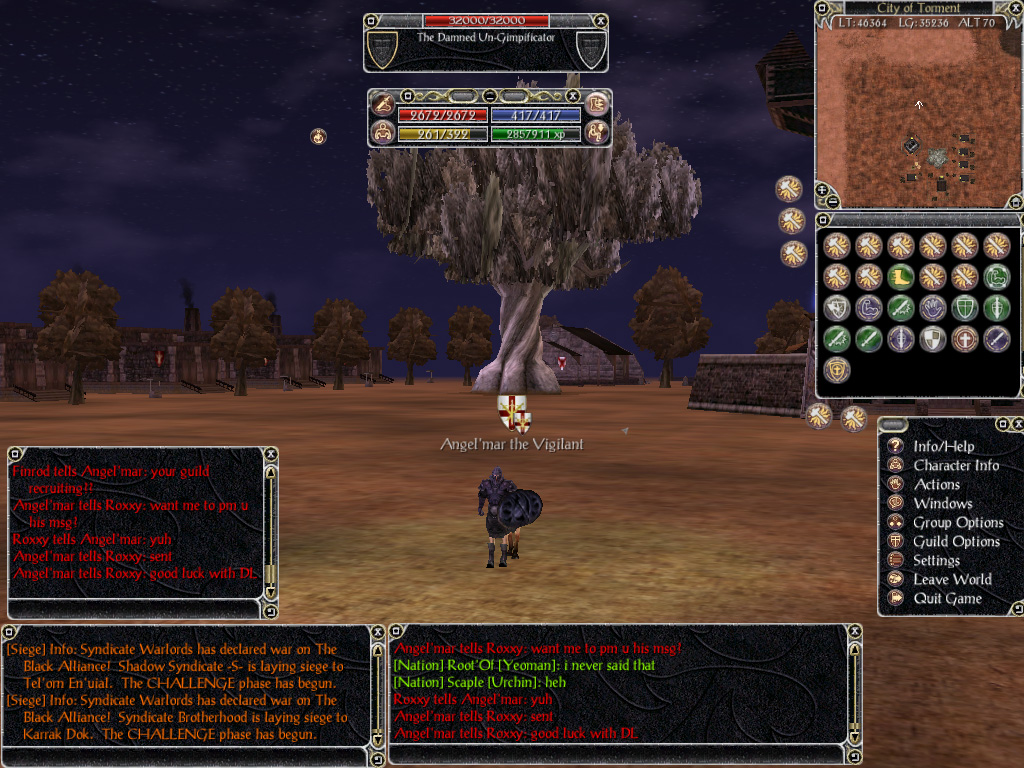 The refugees of multiple fragments had fled to Corruption and as they gathered resources and strength, the scale of the destruction and conflict increased.  Many volumes of the mighty deeds and tales were added to the dark histories of the Age of Strife, but sadly these have been lost.  Only the faintest hints at the contour of the great conflicts remain.

In the far icy north a numerous body of Forsworn and Chaos spawn gathered. In the northeast The Crystal Order, an amalgamation of many former guilds from the Legion of Steel. In the Southeast Dissent was one of the largest nation on the fragment, lead by Deli a former officer in Shadow Syndicate from Deception.  The great wild card were the elite Centaur Cohorts of the Dreadlords and their allies The Shipwrecked Pirates, lead by Arnie, who raided indiscriminately though, would often come to the aide of the forces of Chaos in the Icy North when pressed.

On the two larger desert islands of the Southwest the Sand Pact Nation was being formed.  The nation was the impetus of Owyne of Deception fame, and Phelix and Alittle Bird Co-leaders of the Defenders of Aleria.  Almost every former sub-guild or ally of either the Owyne’s Defenders of Order or the Alliance of Balance joined.  This nation represented half of the great nations that fought in the great server wars on Deception.  The members included the Defenders of Order and their former subguilds The Fringe, The Fremen Knights, Temple of Tempus and Iceclan (now Fireclan), House Daenyr, The Defenders of Aleria, and the Adumbral Empire. 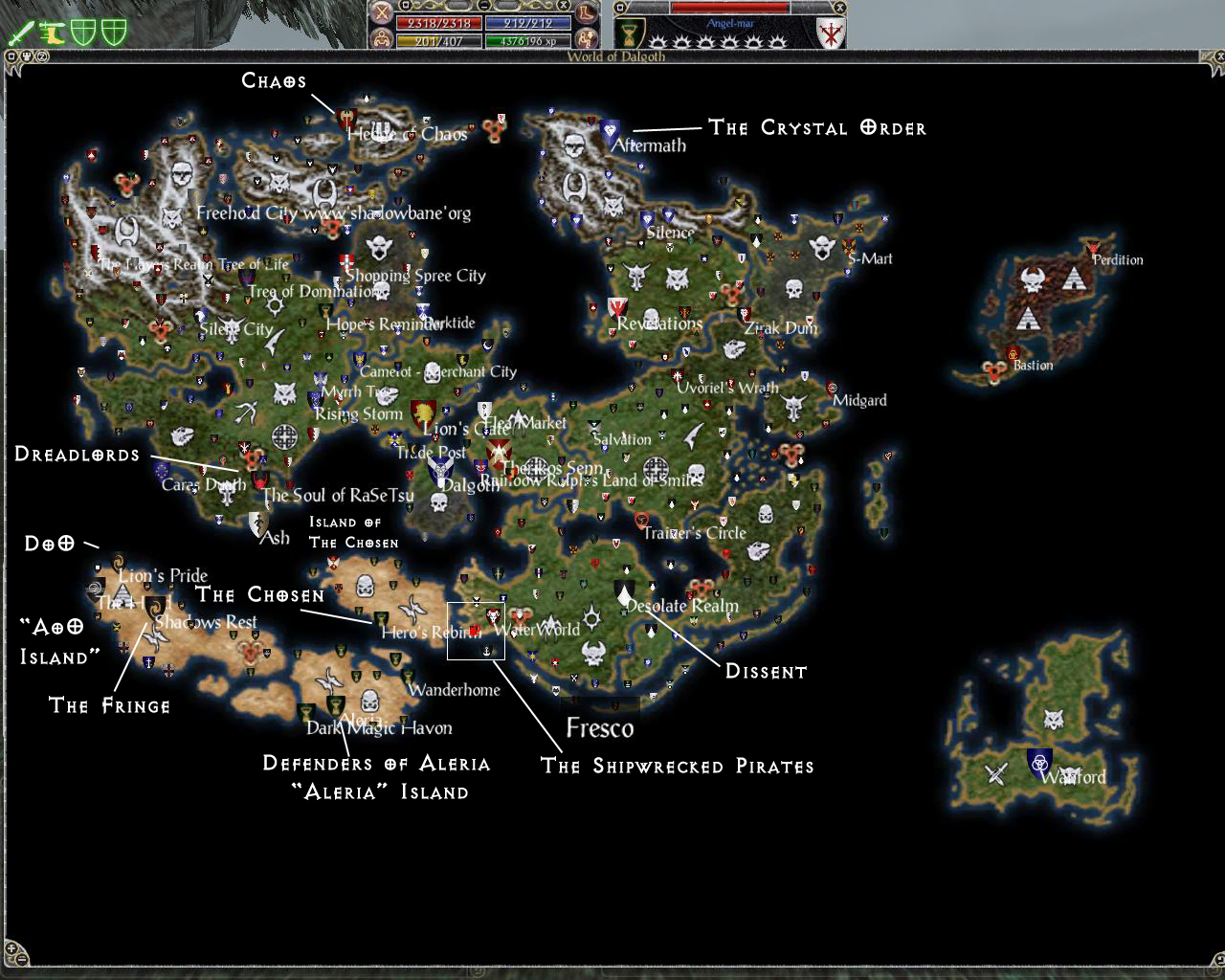 The Chosen (Winterblades) were pressured to join Sand Pact in order to make it a complete union of all the desert cities.  However we were unwilling initially unwilling to become Owyne’s tools, and rejected the prospect of being directly subbed into such a nation.  We risked once again being destroyed by untold hordes of players, and on Corruption our risk paid off.  We remained on friendly terms with Sand Pact and would later become outright allies, all while retaining our autonomy as a nation.  Surrounded by large powerblocs, this status could not last forever, and eventually the union of the desert was completed under The Sand Pact.  The Chosen reserved the right to conduct independent campaigns, and continued to engage in guild vs guild fights with The Shipwrecked Pirates.  The Chosen also gained notoriety within the Sand Pact power block by winning the Sand Pact Alliance 10 v 10 Tournament on both occasions it was held. 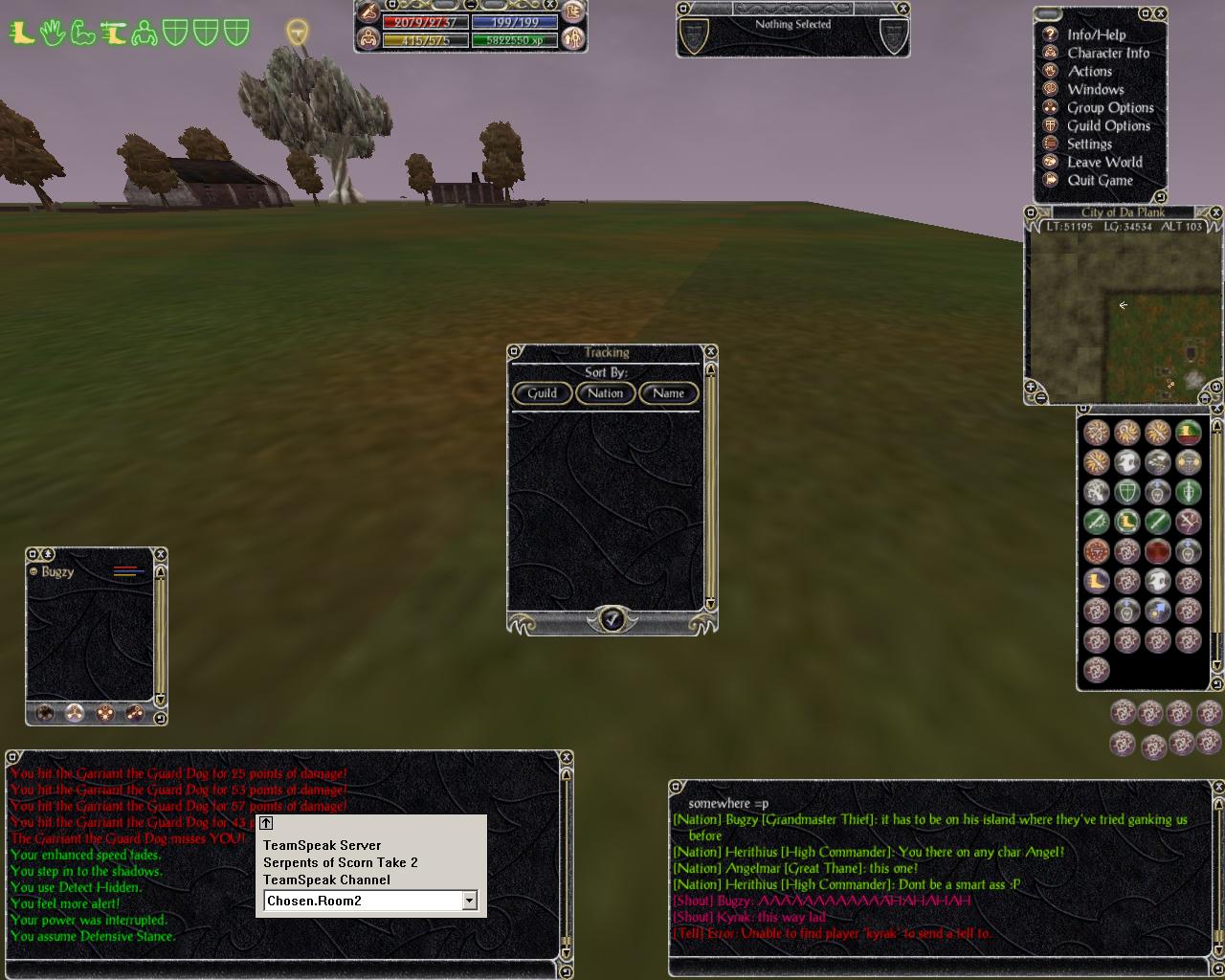 The Chosen enjoyed the ability to participate in the major sieges while still being able to enjoy their small scale pvp.  The Shipwrecked Pirates nearby coastal capital The Salty Maid, made for fun fights between two smaller guilds.  The Chosen managed to capture The Salty Maid but only for seven days.  It was not uncommon for our desert island to be ringing with mighty shouts of “ARRRGH!” and the occasional “Avast, there me Lubbers!” 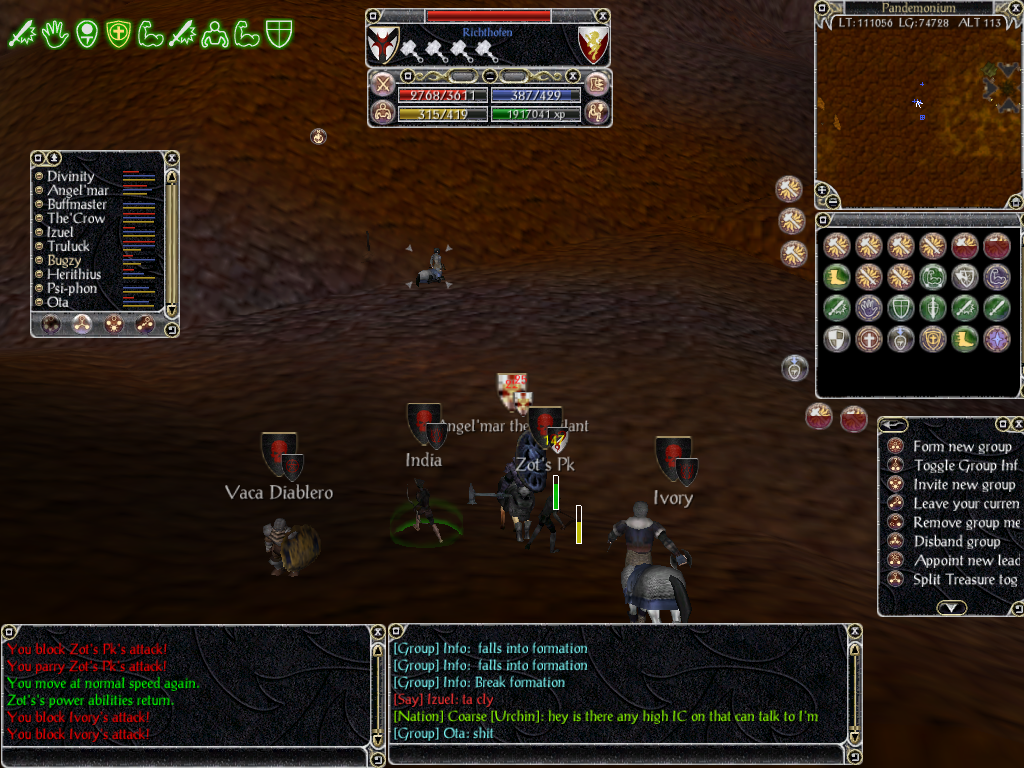 It is difficult to describe properly the Dreadlords, for despite their unrivaled military elan, their only major success in their long campaign against Sand Pact was the burning of Lion’s Pride (a feat quieted welcomed and celebrated by of the The Chosen/Winterblades…).  The Dreadlords were a black Cohort of Centaurs who strayed from their race’s noble heritage and became disciples of chaos.  They were largely barbarians although some druids, rangers, crusaders, and prelates were to be found in their ranks.  The only non-centaurs they allowed were bards to record their epic struggle and scouts and rangers for intelligence work.   The Dreadlords strategy and success relied heavily on superior mobility and maneuvers.  Standard open field  tactics involved attacking their enemies from multiple flanks, drawing out their enemies so they could be killed piecemeal, the feigned retreat and above all focused fire.  It was a true beauty and marvel to see half a dozen centaur barbarians suddenly stop their flight and charge the foremost pursuer, eviscerate him and resume the retreat immediately. 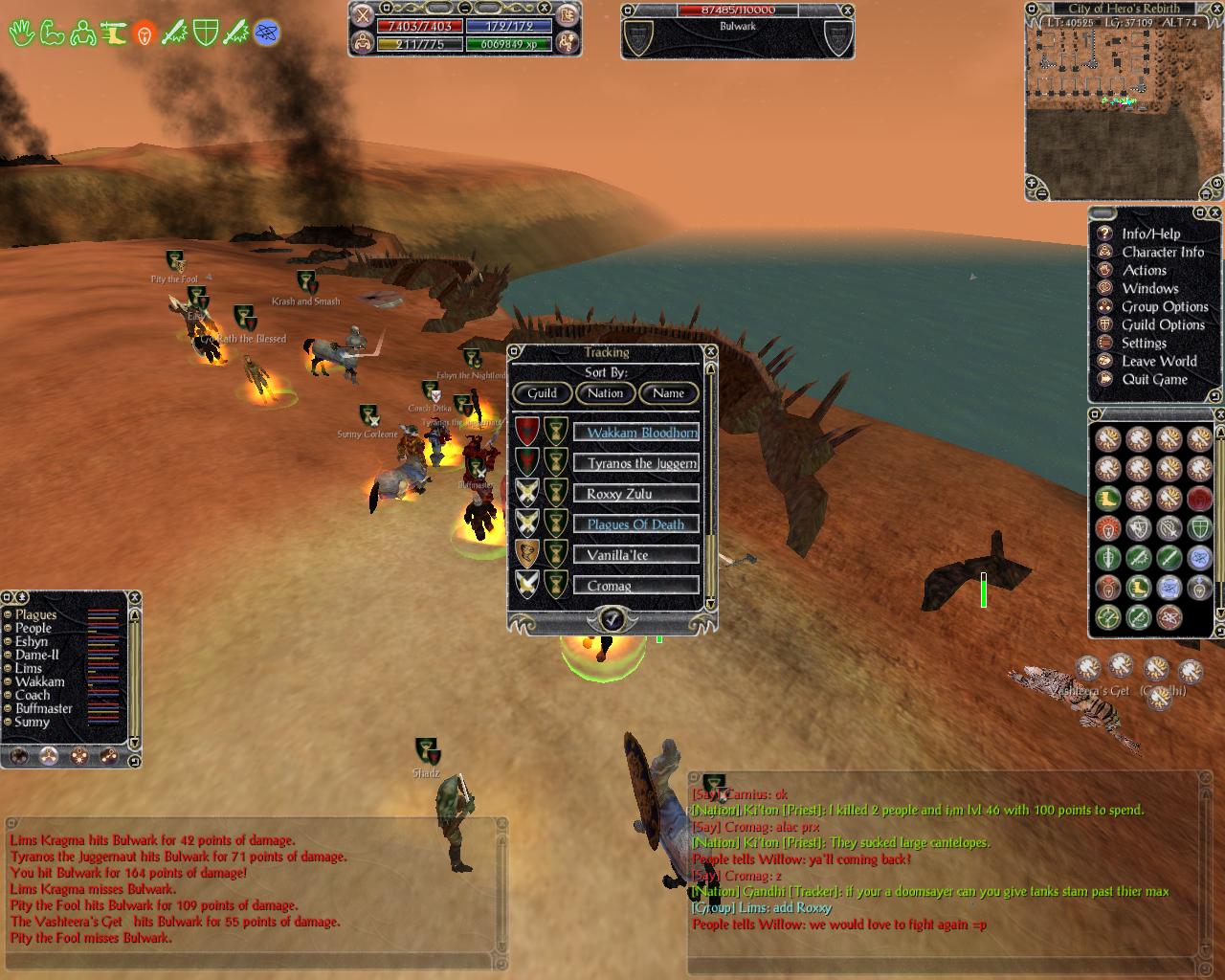 The Dreadlord wars dragged on for months with no major shifts in the balance of power.  Eventually the Dreadlords and the Defenders of Aleria, the two major antagonists announced they were leaving Shadowbane.  The Dreadlords baned Aleria in what was to be the climax of Corruption.  The siege of Aleria was renowned and great epic sages and histories, now lost to the sands, chronicled the great siege.  Sand Pact had learned from the Dreadlords mobile tactics and split their force, Centaurs flanking and harassing in the field with “two-leggers” defending the walls.  However the student had not surpassed the master.  The Dreadlords broke through the Sand Pact outriders and then rushed to the walls where they contracted a mercenary wizard to teleport a strike team on to the walls of Aleria.  The surprised defenders, mostly mage and healer casters barely managed to hold the walls.  A second strike was teleported in and the battered defenders were driven from the walls by the axes and hammers of the Dreadlord barbarians.   The remaining Dreadlord forces began summoning back their dead and bombarding the outer walls. 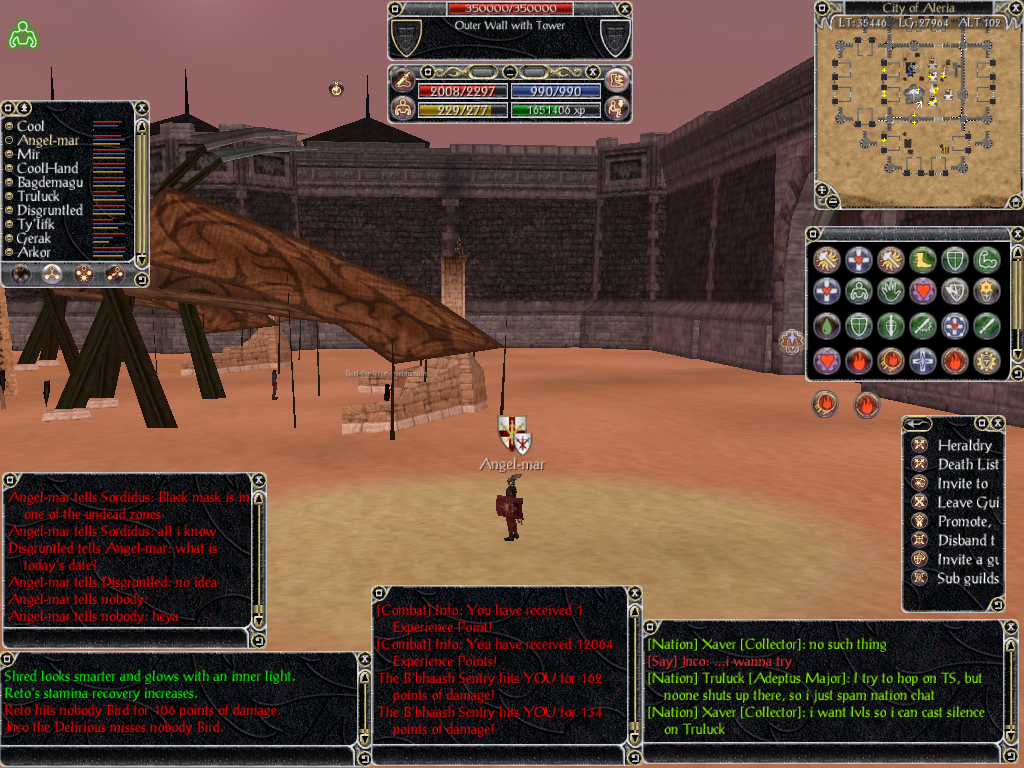 Phelix of Aleria rallied the Sand Pact at a nearby city and marched on Aleria.  The Sand Pact forces managed to capture the banestone, but it was feared the tree of life was falling to quickly.  The relieving force Sand Pact pushed through the breach in their walls to find utter chaos.  The initial rush to the city center and the Tree of Life was largely uncontested.  The Dreadlords instead fell back retreating onto the complex inner walls.  In a textbook move, the Dreadlords used the momentum of the returning Sand Pact defenders against them.  The defenders rushed onto the walls fighting pitched uphill battles.  Where the Dreadlords were loosing they pulled back only to turn and fight moments later.  Phelix in the critical moment realized the peril of the situation and tried desperately to rally his own Defenders of Aleria to the tree.  The disciplined Defenders returned, shifting the momentum of the bloodthirsty allied Sand Pact contingents and soon the various guilds leaders were recalling their own troops.  The Dreadlords were unable to dislodge the massed force at the tree and the remaining forces on the walls were removed wall section by wall section.  Phelix kept the Sand Pact forces rallied close together and brought overwhelming force wherever he directed on the battlefield.  The Dreadlords did not give up, but the tide had turned and the defenders eventually broke the siege after many hours of combat the ebbed and flowed in favor of both contestants.

Following the exit of the Dreadlords and Defenders of Aleria from Corruption, the server became infested by a new scourge that brought the server together transcending the normal desert versus mainland power politics.  An unforeseen menace from Asia arrived on Corruption with the closing of En-Tranz the Asia Shadowbane Distributor… suddenly there were hordes of players speaking in pictographs.  The Asian Wars saw the alliance of Sand Pact, Dissent and TCO in attempts to remove their scourge and get enough people to awake at 6 A.M. to attend offensive banes against the Asians.  Six months of 6 A.M. offensive banes and no-show NA primetime defensive banes quickly sapped the will and morale of the forces and so the Winterblades began a new on the unstable fragment of “Test” (the testing servers).