The Winterblades wandered long in the Void for a new home, visiting many worlds including Guild Wars 2, Everquest 2, Star Wars Galaxies, Warhammer Online, World of Warcraft, Archeage, and others.  Nothing we found could compare with the freedom, risk, strategy, politics, and consequential pvp of combat of Shadowbane–a game that was ancient with a creaking engine that started development before the turn of the century.   And so we restlessly wandered onward.

In 2008 the rumors of a new world emerged that would bring an end to the long wanderings of the Winterblades and the greater Shadowbane community.   The new realm was Darkfall, a game to succeed Shadowbane’s throne as a politically driven and unapologeticly PVP-focused MMO.

Darkfall’s highly secretive beta began in 2008. The Winterblades had a strong recruiting effort, pushing our roster near 100 members and showing a dominant force on the beta server.  The Winterblades claimed the city of Erinthel, a mighty mountain fortress spanning five separate levels.  The first person combat and friendly fire mechanics made Darkfall exciting, thrilling, and most importantly…new.

Unfortunately, like Shadowbane, Darkfall had major issues when it launched on February 26, 2009. Purchasing the game was limited to a select few that were lucky enough to be online at the right time, and slip through the near impossible internet blockade of users trying to access a server without the necessary amount of bandwidth. Of our previously amassed army from beta, we had less than 10 able to purchase and play the game within the first few weeks. 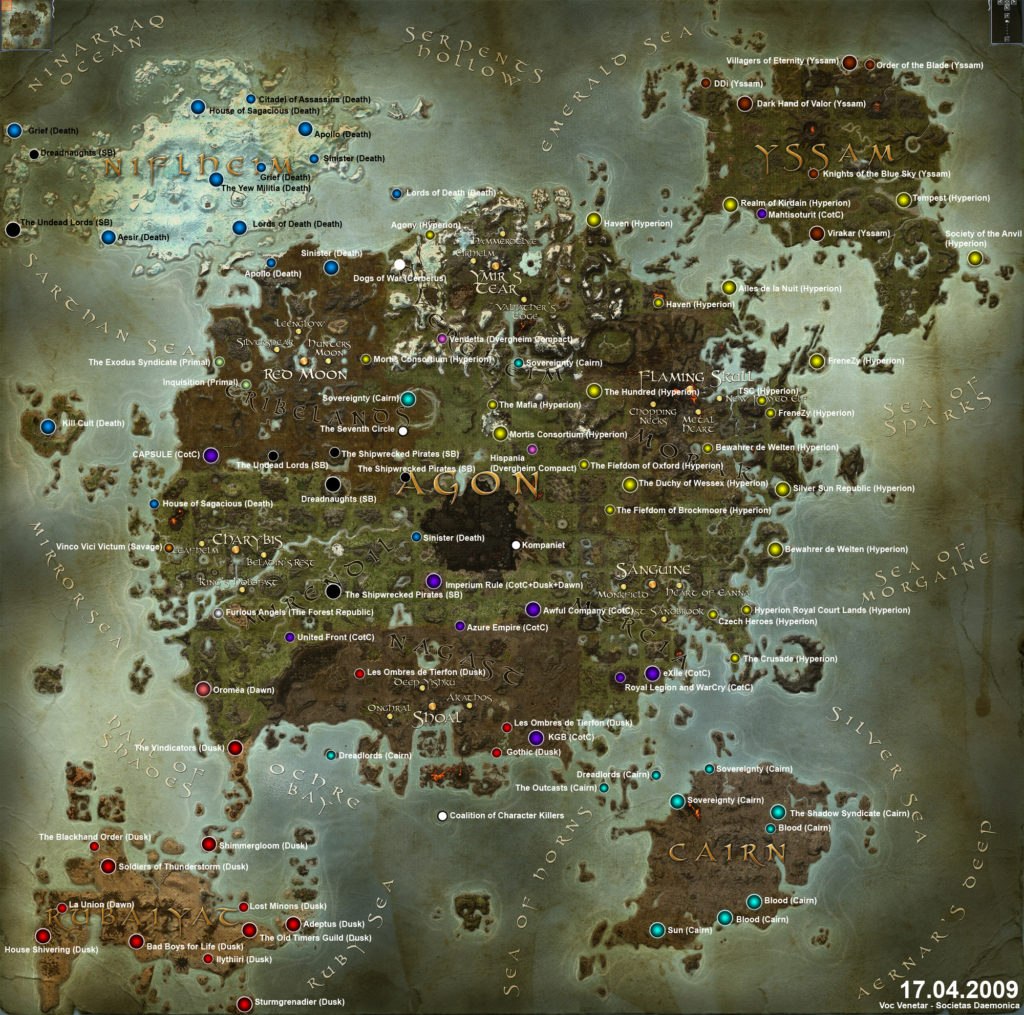 Going into the game with such a small force, the Winterblades were instrumental in forming an alliance of previous Shadowbane guilds. The Winterblades and The Shipwrecked Pirates were at the head of this political alliance, eventually bringing together forces from Societas Daemonica, Commander’s Reborn, and many other entities. The alliance was known as the Shadowbane Alliance (SBA). Our initially small alliance was able to conquer key positions in the world.  The Winterblades recaptured their original beta city of Erinthel after walls in the town were built.  Fortunately, the town was taken just days before city gates were completed, which from our previous experience we knew rendered Erinthel nearly an impregnable fortress.

The Shadowbane Alliance grew and morphed over the coming months.  The Winterblades ultimately merged with The Shipwrecked Pirates with Maj of TSP running the alliance and Damebix of Winterblades as the lead field commander.   Erinthel stood as the gem of the mainland, surviving multiple sieges, many of which were decided outside of the gates.  The fortress was often the location left vulnerable during offensive sieges. Erinthel ultimately got a  to be known as an unsiegable fortress.

After the Graveyard Alliance conquered everything it could and lacking any further challenges, the Winterblades decided once again it was time leave the game. Some players moved to the NA server when it opened in July 2009, some players remained on the Europe server, but most took a break from competitive gaming and returned to the restless wandering hoping for a true successor to Shadowbane would eventually emerge.